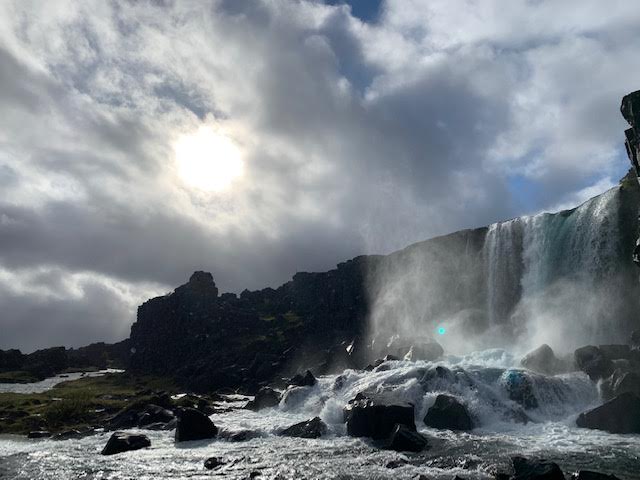 In looking back at the manuscripts/books I’ve written, a very interesting phenomenon has become evident. When I’m in the final stages of preparing a years-long-in-the-making manuscript, sometimes a new idea for a manuscript bubbles up out of nowhere and bursts into being. When I was completing / editing what would become The Seed Thieves, my first book and one I would consider lyric/narrative realism, the idea for what would become American Prophet came upon me—a stylistic departure—and the poems started pouring out in droves over the next couple years. Then, as I was completing the 10-15 year manuscript that would become Our Sudden Museum—another lyric/narrative text—poems that would later become Severance, another stylistic departure, began pouring out of me, relatively quickly. The manuscript Cage then followed, which is another longer-term project (and another stylistic turn,) followed by the manuscript for All We Are Given We Cannot Hold, a relatively longer-in-the-making manuscript that is a return to lyric/narrative realism. Then, lightning struck again. As All We Are Given We Cannot Hold was in final editing phase in Iceland, it happened. In a matter of 3 days my last week in Iceland, 12 poems burst forth. Then when I returned home, 10 more. Then, 10 more. Then, 10 more. Between late September and the end of October, I’d written a total of 80 new poems, which has become the manuscript I’ve decided to call, for now, Land Songs. For this manuscript, having been for so long craving shorter work, I limited myself to 8-line poems, inspired by Icelandic skaldic stanzas.

Overall, I tend toward a slower process, mostly. For me to write 20 (good/keeper) new poems in a given year—well that’s a good year. So, to have recently written 80 in a little over a month—is really wild and terrifying and thrilling. And, at one time, earlier in my writing life, I’d have been deeply suspicious of this, or even discounted these poems—or stopped writing them as they were happening. However, over the arc of my time writing, I’ve recognized these powerful pulses in my process. At times—and most often—my process is long, slow, grinding. At other times—there is something like silence. Then, powerful upheavals. I’ve learned to see this, to see my creative ocean for what it is. I keep my sail up. I check the winds. I allow for months of ease. Months of work. Then, out of nowhere: days of monstrous and glorious waves to surf.

Anything can happen and I’ll trust all of it.

Rather than see this new manuscript Land Songs as an anomaly or “not real” work of mine, instead, I’m wildly excited about it. I see each of these books that have come as outbursts, as (relatively) quick flares, not as outside the realm of my slower work, but rather due to the longer sustained periods of creativity. That said, were my process this fast all the time, I would be disappointed and suspicious. Even though it is impossible to quantify, I have a deeply intuitive, utterly personal sense for the quality of my work—as flawed as that radar can sometimes be. If work is happening too fast and lacks quality—a correlation sometimes—I feel it, and it is nauseating. And those poems get dumped. But, when it happens fast AND is happening at a high level of quality for me, subjectively, it’s utterly rare and wholly thrilling. And NEVER has this happened before. 80 poems, and (to my ear) good poems, in 5-6 weeks. That’s an ocean that needs to be heard.

Beyond duration in the creative process, these wild stylistic shifts excite me even more. I’ve often said that the Beatles and Radiohead, and other artists that make whiplash creative turns, are, for me, models of an enviable creative trajectory. Rather than find a preferred subject, speed, method, style, etc. and stick to it, I’d rather it all be a hot and holy mess. A big old oak with gnarly branches, some stunted, some thriving. A long and winding road. Big twists, experiments, turns, failures. (Of course, these are much more profoundly bold moves for rock bands with millions of fans following their every move. No one’s watching me—so it’s a lot easier. Fine by me.)

A few failed poems into this newest manuscript, in late September 2021—the work took a turn and spilled throughout all of October (oh, holy month, thank you, Universe!). Land Songs leapt out at me with what IT wanted, and so I listened: shorter poems, persona poems, land-based poems, and for me, for the first time ever, a book that is grounded by / inspired deeply by PLACE. By landscape. Ecosystem. Environment. By Iceland—a land I had a strong sense would be filled with poetry. However, though in a different style and voice, and though the poems are “spoken” by other voices, the book is also deeply personal, as usual, and most hopefully, universal. At 80 poems, which felt like a good, round number, I stopped—the month-long hose-rush had less pressure behind it, and I felt the distinct moment where the book stopped writing itself and I began writing the book—so I honored that, and decided to stop generating new work, and to focus more on editing.

And there it was: a totally unplanned manuscript, Land Songs, that erupted just as I was finishing the book I set out to finish during sabbatical.

I will NEVER expect these rare and good-wild storms, nor even plead them into being, but when they come, I’ll take them as the gifts they are—and surf as many waves as they stir up.

Up next: the longer, harder, more arduous and far less pleasurable work—of finding someone to publish all these poems, and these unpublished manuscripts. Maybe that will happen, too. But I won’t hold my breath.

I’m having far too much fun out to sea.