Music into Words into Music

In the early spring, I received an email from the magnificent composer David Biedenbender, who’d already composed a piece for my poem “Staying the Night,” which has been performed in Idaho, Ohio and Michigan thus far. His composition for “Staying the Night” was already an honor—as David himself was inspired to select that poem from my most recent collection Our Sudden Museum to put to music—and his composition and its performances were so, so incredible. I was so fortunate this year to see the piece performed by Joanna and Kennen White, who comprise Crescent Duo, and who commissioned this much wider project—that included collaborations of several poems and compositions, and which culminated in a CD entitled “Poet as Muse.”

However, I was even more honored with David Biedenbender’s most recent invitation, because David wanted me to compose a poem around a theme that he already had in mind, a poem that he then would use as inspiration for the music. As a father of two young children, David expressed to me his extreme sorrow and fear and hopelessness in response to our horrific national trend of school shootings. He asked if I might write a poem that would specifically convey that response. As our conversation continued, he decided it might be better to open the lens somewhat, to not necessarily address the shootings specifically, but to try to capture the feelings they provoke, particularly from the perspective of parents, and, in a more general way, that whole world of care and concern.

I loved this idea, and set to work. As always, in beginning a poem, one has only an inkling of an idea what direction one will go, and no clue the duration of the labor. Beyond that, David gave me a deadline—something I’m not typically familiar with in writing poems, though I was glad to be put to the test. The poem that evolved—well, poems, really—it ended up being two poems—were quite challenging and involved, I’ll admit, intense work to wrestle into being—over a period of about six weeks.

Only a couple lines came to mind initially, as I pictured the horrific image of slain bodies in a school hallway: “Before they lifted me from mingled blood…” and “No world can break you.” However, though those lines were preceded by some really weak, quick, false-start stanzas—I knew that first line to come to me (“Before they lifted me from mingled blood…”), was both the spark and the emotional anchor. That’s all I knew, however, along with the fact that the emerging speaker was one of the murdered children, addressing their parents. As this poem evolved, I became more and more surprised by the tone of its voice—this “child” was, as I’d come to realize by its voice, a sage, a world-wise spirit speaking, assuaging his parents by letting them know that they (the child) had traversed other worlds already before this one, emphasizing the illusory and ephemeral and ETERNAL nature of love and its many bonds.

As the poem was a few lines in, then a few lines more, I felt compelled toward form, toward a womb to hold the poem, and it became a triolet—an age-old, highly repetitive, densely packed 8-line French form—a favorite of mine in recent years. Also, as I continued, I knew that this one poem—in the voice of a child, required a response from the parent, that it would be need to be a dialogue. However, what I felt emerging as I wound through the thorny woods of the first poem was that it felt more like a response already. Therefore, I realized, I was writing this dialogue backward—response first, call second.

I’d love to say the poems flowed—but they were two of the most difficult formal challenges I’ve experienced to date, seeing dozens of revisions in 5-6 weeks it took to make them. It is not terribly difficult to write a sketchy or mediocre triolet (oooh, I’ve made many) because five of a triolet’s mere eight lines are repeated.  In fact, I use the form in my craft course every semester because it’s a great way to get students into the thick of form as they can quickly see the poem developing. However, to write a good one is another story, and that’s what I got myself deeply caught up in, and with a deadline staring me in the face. The beauty of the form is its intense compression, yes—but I also love, with variances introduced by punctuation and syntax, to bend surprising new shapes from the sentences, and therefore new meanings. And this was crucial with this piece, a dialogue, as I wanted to create quite contrasting tones.

The poems became known as “Shell and Wing.” I’m not sure whether I’ll try to publish them as separate pieces or as one piece in two sections. The voice in “Shell,” the parents voice—is centripetal—a surrounding and pushing-in energy, communicating a desire to keep the child (as a bird, metaphorically) in its shell, as long as possible, then in its nest and close to home as it learns to fly. The poem features higher vowels, lots of breaking consonants, as I hoped to emphasize its parental anxiety. The energy I was after is one of enclosure and tension. “Wing,” then, as its precedent in counterpoint, is centrifugal—a confident pushing outward against that shell, more fluid and flighty in its language. Late in the process, I became both worried and thrilled that the poem’s sonic foreground and consciously dream-washed images might be too oblique, that the poem wasn’t communicating directly enough, or communicating what I’d hoped. A failure, as usual, so I felt. But—deadline up, I had no choice. I sent it to David, who faced his own deadline in composing the music.

What I learned from David later is that he was so moved by receiving the initial draft of “Wing,” which I’d sent to him upon its completion, that he said he began hearing a song—and singing it to himself—almost immediately after reading the poem. He was seeing into and through the language, as only musicians like him can—into the music of the words that I’d conjured. He took a couple of weeks to get back to me, due in part to end-of-semester business and, I later learned, because he was already deep in the making of his music-from-my-words after receiving my words-for-his-music. “There’s so much Music in your words, Robert,” he told me via email in responding, which lit me up—coming from this wonderful musician and composer, especially having feared I’d failed.

I can only attempt to express the depth and intensity of the feeling I had then, after David sent me the draft of his composition, which I received a couple of weeks ago. He emailed both the sheet music and an audio file. I first opened the sheet music and got immediate goosebumps looking at my poem now literally a piece of music, my poem’s lines written beneath—to me—the gorgeous hieroglyphics, the hanging drapery—of his notes, strung from their bars and measures. “Tenderly…” and “wispy, playful…” and “somber” among the composer’s instructions for the soprano, flute, clarinet, violoncello, percussion, and piano. “As warm and clear as possible…” written above a beautiful low chord composed for the piano piece.

And to see his creative decisions, which I encouraged—to draw words out, to find what music he wants in them, to repeat words, to lengthen them. But then, the music. I looked out my window at the early spring trees as the first notes of the piano began, and I was crying before I realized it. How does one describe the feeling? To have reached the hand of my poetry into the dark, and to now feel, from out of that seeming universally subconscious darkness, the hand of another art now, from somewhere, dressed as music, coming to hold the hand of my art.  Here it was—in my eyes, then ears, then heart: a song of songs. A poem translated from a feeling into words, and a composition translated from words into music. 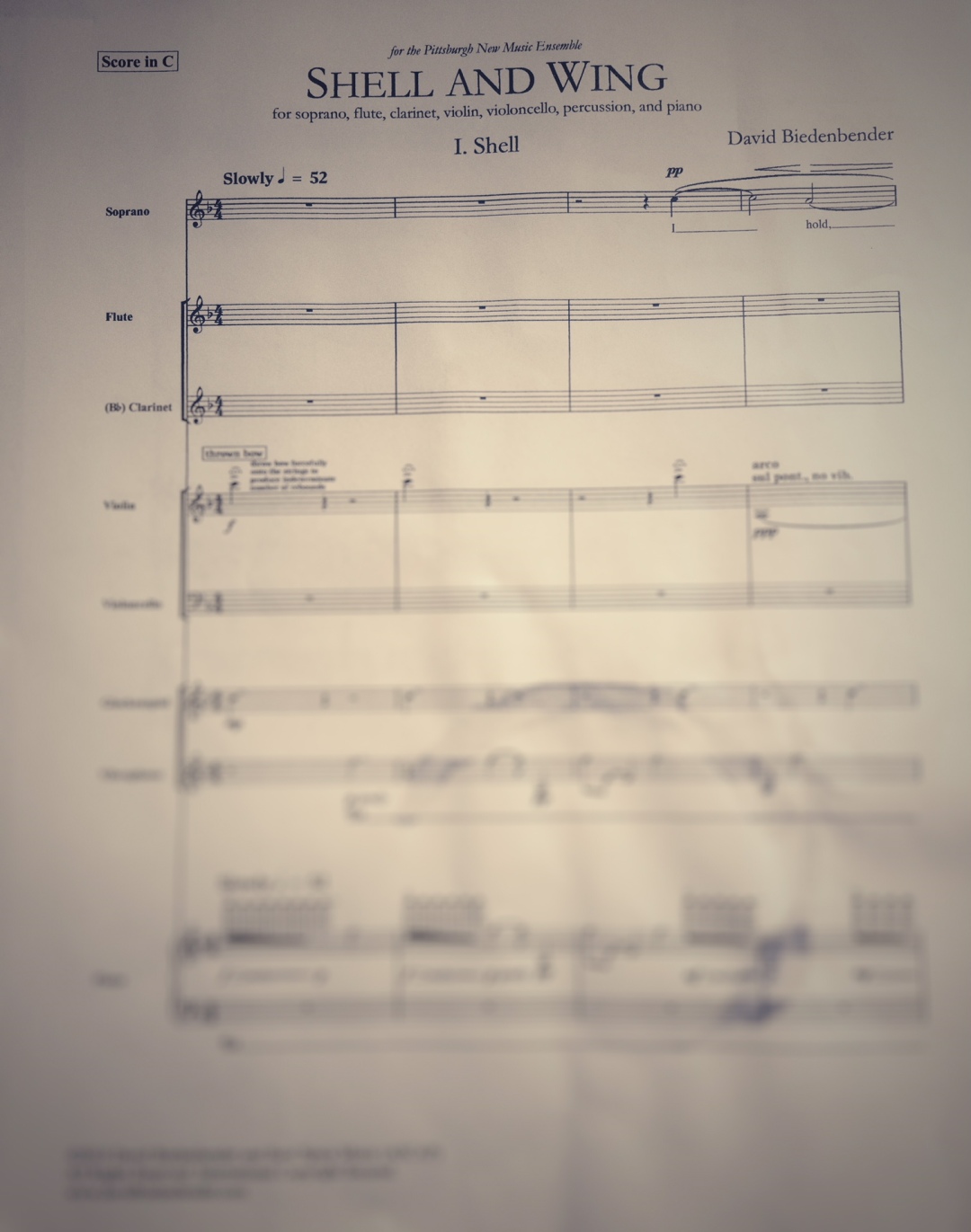 Beyond this—I have been invited by David to hear the world premiere of his composition “Shell and Wing,” to be performed by The Pittsburgh New Music Ensemble in a show called “The Human Experience” on July 6-7. Click the link in the last sentence for tickets or information about that performance, should you know of anyone interested in attending.

Also, here is David’s website, where you can read news of his upcoming performances and listen to more of his incredible music.

Robert Fanning is the author of four full-length books of poetry: Severance (Salmon Press, 2019), Our Sudden Museum (Salmon Press, 2017), American Prophet (Marick Press, 2009), and The Seed Thieves (Marick Press, 2006) as well as two chapbooks: Sheet Music (Three Bee Press, 2015) and Old Bright Wheel (Ledge Press Poetry Award 2003). His poems have appeared in Poetry, Ploughshares, Shenandoah, The Atlanta Review, and other journals. A graduate of the University of Michigan and Sarah Lawrence College, he is an Associate Professor of Creative Writing at Central Michigan University. View all posts by Robert Fanning, poet