The Light Beyond the Body 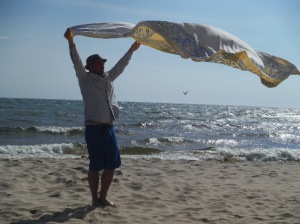 Last night I mulled with friends the question of psychic abilities, specifically if it might be possible for one to either transmit or receive, either consciously or accidentally, the thoughts of others. I loved the idea, but, as usual, leaned toward the Big No. We also discussed the experiment–that the molecular structure of water could be supposedly altered by one shouting mean things at it, or by cooing to it. I love this thought, too. But No.

And today, as my wife and I walked through the cemetery (because what better place to feel more alive in your jogging shoes) we considered this same question,  along with the question of whether it is possible that there are fields of energy so to speak–that we, as human beans, may have the power, perceived or not, to enliven or enervate. She, as a dedicated yogi, believes this without a shred of doubt; in fact, the practice of yoga is, among other things, a way to cultivate that very energy, that invisible field beyond the body, that my wife says extends 9 feet. (Big No said to her, always the logician–well, so, on days when my “energy” is “bad,” just stand 9.1 feet away).

I was willing to offer that I do truly believe that we have tremendous effect on the so-called “energy” of a space–considering I, for one, can, and have, driven a fat black stake with my mopes straight through the light of another’s blissful moment with my cynicism, and (though very rarely) vice-versa. This, however, I chalk up to non-verbal cues, the emotional waves we cause with our glances, with our body language. I have even dubbed it “sitting in the middle of the trampoline,” when one brings their dark psychic weight into a space, causing others to tumble toward them. And conversely, it seems, or at least it would follow logically, that one can be a lifter–that one can, with a smile, a joke, a brightness, LIFT those around them. Perhaps. And again, I lean (maddeningly) toward the palpable, the concrete, the physical realm of explanation–that we can effect each other’s moods, outlooks, moments–by the physical, verbal or nonverbal expression of our emotions. About that I have no doubt.

But can we cause quivers in the “energy”–in some supposed field–of a space, with our mind, our spirit, our psyche, our own energy field?

Again, I lean toward the Big No. Which is something of an “I Don’t Know” in disguise. Deeper down, it’s a Big I Don’t Know, but sometimes it’s fun to wield the Big No, like a little caveman thumping the Earth with a big No drumstick. I even sometimes like to point my Big No at the sky and shake it around.

Psychic Energy? Fun idea, but No.

God watching over us? Lord forgive my Big No, but maybe No, or No, Maybe.

But what about prayer? What about the millions around the earth, in meditation? Imagine (ssssshhhh, Big No) the luminous waves of millions in meditation, in prayer, in hopeful contemplation?

What about the breath of a child, speaking to a tree–as I often did as a child (um and OK, maybe did recently: little yes) and believing–NO–knowing that tree is a willing confidant. Or that flower or butterfly. Or those who speak their troubles to the Wind.

Who am I with my Big No to say that doesn’t work? Maybe I need to stuff my Big No into my mouth until it sprouts a Yes tree.

A few hours ago, I read a Facebook status by my dear friend Charlie Brice, who wrote that last night his wife Judy was in so much physical pain last night that he decided to share with her one of my poems. He said it helped her, that it made Judy–if only for that short while, feel better. I was deeply moved by that. (But deep down, what did my niggling little Big No say to that?–Well, that’s simple, said Big No: it distracted her from the pain. There was nothing spiritual happening.)

Maybe here is where I draw the line.

I’ve never gone to the blank page to be frivolous (though frivolity better be a major ingredient), to fling words around until they make a shape. To write a poem for the sake of writing a poem. No. I go to the page–I write a poem because I have been stirred by enough poems to know that they make shapes of the air, and that those shapes enter the ear and the heart of the listener and the reader, and that they alter what’s down there. I have felt the glow of poems, have felt them get into my blood. And I hope my poems do the same for others. I spend a long time making poems–knowing if I find the  right notes they might just make a song that will stir another, soothe them, rouse them. After all, I’ve seen the hairs of my arms stand-on-end after reading a poem, or listening to a song. I’ve felt, perhaps, my own molecules change shape while standing before a painting. Maybe have even felt the Light Around My Body stir.

So YES. Big Yes (for a moment anyway) to this Light Around the Body, to this Field, and to US, to the way we stir each other’s energy, molecule by molecule, whether by a glance, or by our breath, or by, here’s a thought: (Why Not, Big No?) a thought.

It’s a pleasant idea, anyway. And you know what they say about ideas.

River Fanning (aka Robert) is the author of six books of poetry, including four full-length collections: Severance (Salmon Press, 2019), Our Sudden Museum (Salmon Press, 2017), American Prophet (Marick Press, 2009), and The Seed Thieves (Marick Press, 2006) as well as two chapbooks: Sheet Music (Three Bee Press, 2015) and Old Bright Wheel (Ledge Press Poetry Award 2003). His poems have appeared in Poetry, Ploughshares, Shenandoah, Gulf Coast, Waxwing, Thrush, The Atlanta Review, and other journals. A graduate of the University of Michigan and Sarah Lawrence College, he is a Professor of Creative Writing at Central Michigan University. View all posts by Robert Fanning, poet

2 thoughts on “The Light Beyond the Body”